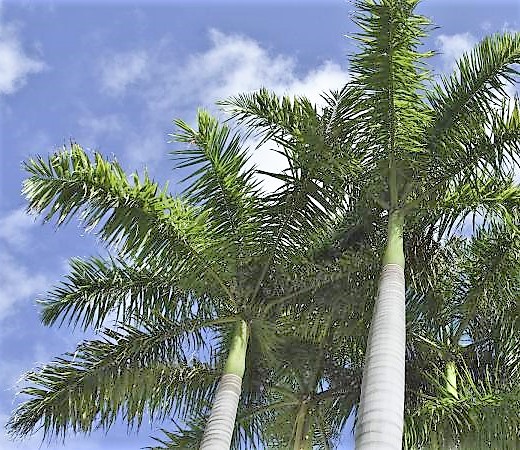 The Florida Royal Palm (Roystonea Regia) is a Florida native palm species and is often considered one of the most beautiful palms in the world.  The species is native to South Florida, Mexico, parts of Central America and the Caribbean.

The palm is characterized by its smooth gray trunk and its long full fronds.  The palms grow up to 80 feet in height and are a highly sought-after specimen for South Florida homes.  The Royal Palm will take partial shade as well as full sun and is moderately salt-tolerant and drought-tolerant once it is established.

The palm also plays an important role in the environments they reside in.  They act as a retreat for the Cuban tree frog.  The flowers are visited by pollen-collecting bees and are considered a good source of nectar.  While not found in Florida, the Cuban flower bat, leach’s single leaf bat, Jamaican fruit bat and the social flycatcher bird feed on the fruit and nectar where they are found in other parts of the world.  Hawks and other birds can be spotted nesting in the crowns of Royal Palms in South Florida.

Due to the size of the unique palm, it is advisable to plant them at least 8 feet from each other and at least 10 feet from one’s home as the fronds can grow up to 12 feet in length.  Royal Palms are often used in lining public streets, entrances to driveways, along driveways or as stand-alone specimens.   Due to its enormous height, it has a certain vulnerability to hurricanes.  In response to this, it has the ability to lose its large fronds to preserve the palm as a whole.  The palm also is characterized as self-cleaning as it drops its dead fronds as it grows.

If you have a large area or long driveway suitable for this majestic palm, invite royalty into your landscape by planting a Royal Palm.

This plant column is a joint effort by all at In The Garden, a Sanibel garden center located at 3889 Sanibel Captiva Road, Sanibel, Florida. For information call (239) 395-5859 or visit www.facebook.com/rswalshinthegarden.

Agave Attenuata – for the Modern Landscape.